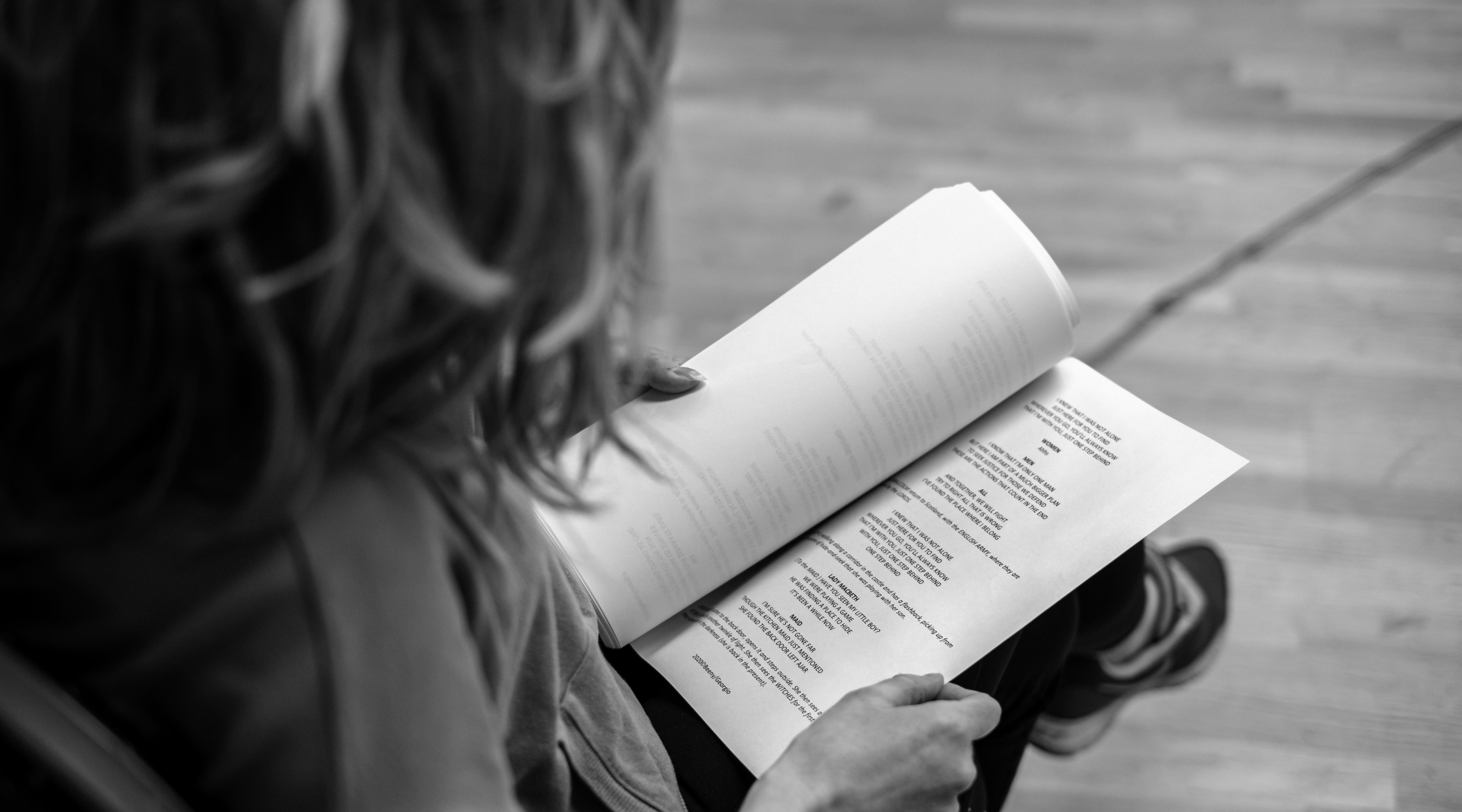 With direction by Jean-Pierre Van Der Spuy and choreography by Lizzi Gee, the new musical by James Beeny and Gina Georgio was put on its feet for the first time, enabling the team to explore and develop the world of Lady M, from its narrative structure and characterisation to staging and movement.

On the first day, the team arrived at the rehearsal room in the Victoria Palace Theatre in London – the West End home of Hamilton. Walking through the Stage Door and up the enchanting staircases is a magical experience, made even more spine-tingling by a passing glimpse of the iconic Hamilton set on the way to the rehearsal room.

The room is a light, airy space with subtle clues that the Hamilton cast rehearses here from time to time, such as a blue circle taped to the floor to mark the stage revolve. It is a special space to work in, with its sky light offering a close glimpse of the majestic golden ballerina atop the Victoria Palace as she looks over Victoria, the green glow of Wicked close in her sight.

Due to the COVID-19 Pandemic, scenes were workshopped with small groups of actors at a time, and the first cast members in were theatre royalty Kerry Ellis and Alexander Hamilton himself Karl Queensborough, playing opposite one another in the infamous roles of Lady Macbeth and Macbeth. The week started with an electrifying sing-through of the ‘Murder Plan’ – the scene in which Lady Macbeth convinces Macbeth that they should kill the King of Scotland. To begin with, James and Gina worked with Kerry and Karl on their vocal parts, which are very intricate and chromatic, with unpredictable key and tempo changes. Then later in the week, Jean-Pierre (known informally as JP) and Lizzi put the scene in motion, exploring ideas such as Kerry and Karl circling one another amidst their power struggle.

Another key scene worked on during the workshop was the first scene in the show between Macbeth and his loyal friend Banquo, played by theatre star Jamie Muscato. Jamie got stuck into the part straight away, blasting through the top notes of the rocky duet with Karl, followed by a discussion with the creative team about the relationship between the two characters.

One of the days was put aside to work on the relationship between the story’s hero Macduff, played by TV and film star George Blagden, and Macduff’s pregnant wife, Lady Macduff, played by the Olivier Award-nominated Maiya Quansah Breed. To explore the complex relationship between Macduff and Lady Macduff in Lady M, which is founded on both love and fear, George and Maiya sang through their scenes with James and Gina, experimenting with different vocal styles and tones to convey the way that their emotions develop throughout the story.

The following week, more of the cast were brought together, including theatre and TV/film star Robert Hands, who was nominated for an Olivier Award for his performance in Come From Away. With a larger number of cast members together, JP and Lizzi could work on the style and choreographic language of Lady M – in other words, how the actors’ movements could look on stage. This was particularly useful in terms of experimenting with the choreography of the witches. In the original play, there are three witches, but in Lady M, the witches take shape as many figures, who form one large, parasitic organism that feeds on the desires of the main characters.

The workshop had to be cut a little shorter than planned due to several cases of COVID-19 in the group, but fortunately, the cast and team managed to work through a lot of the script up to that point, and they had a lot of fun bringing the show to life for the first time.