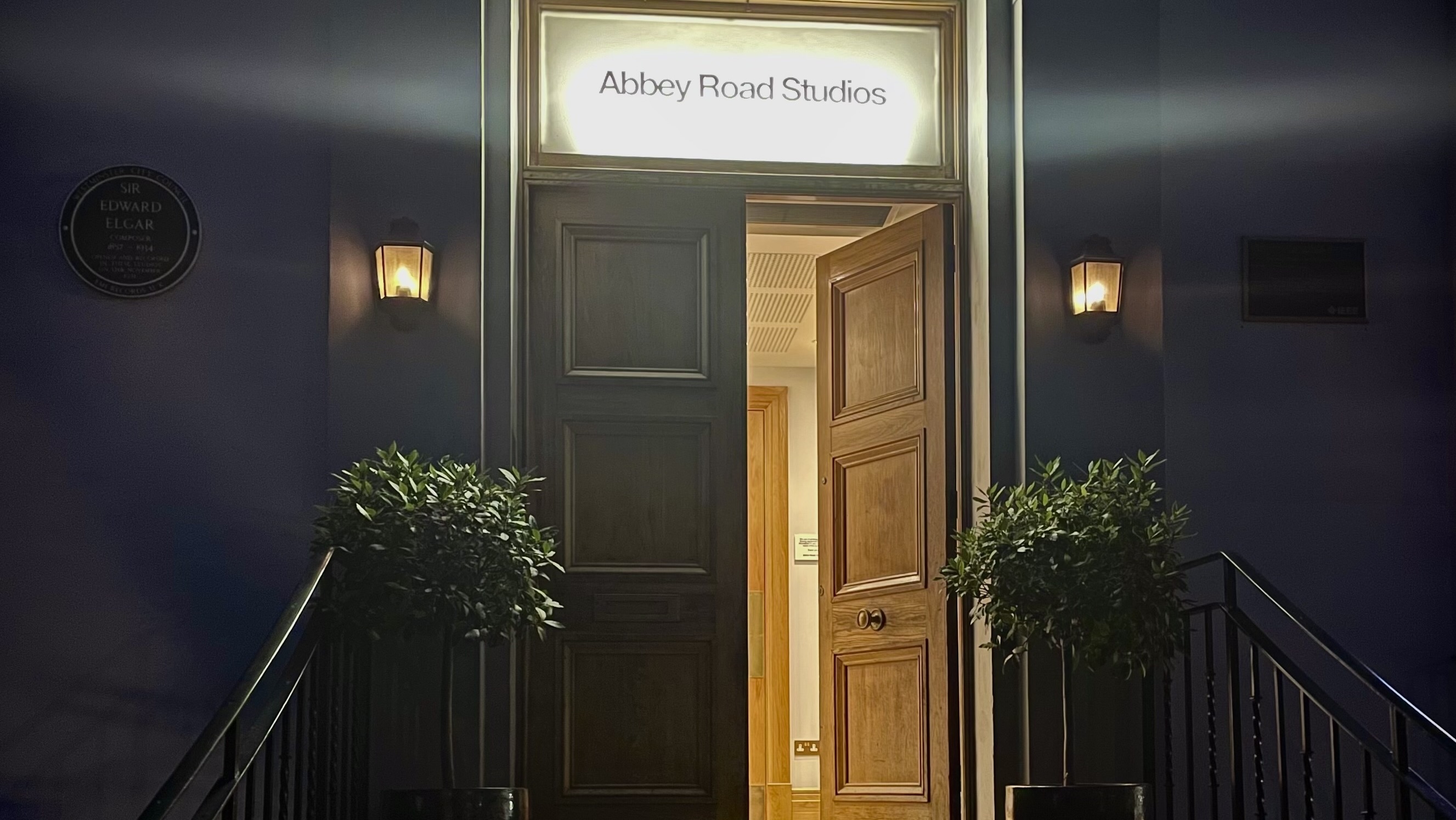 This January, some of the lead songs from Lady M were recorded at Abbey Road Studios, due to be released as singles over the coming months.

As soon as you walk over the iconic zebra crossing and through the gates, you are instantly immersed in the magic of Abbey Road Studios. After entering the intimidating wooden doors, you are met with light, pristine corridors filled with black-and-white photographs of the music legends who have played a special part in its history. The walls boast signed posters of the Lord of the Rings trilogy, the Marvel films and other big Hollywood blockbusters, and in the foyer, you are welcomed by an original framed manuscript of the string score for the Beatles’ ‘Yesterday’.

After settling into the warm studio with a cup of tea, James and Gina kicked off the 10-hour session ahead by recording the guitar and piano for the tracks alongside their close friend and bassist James Luke. The trio, who have played together for over 10 years, recorded their tracks together before being joined in the evening by renowned cellist Evie Heyde.

Lady M lead Kerry Ellis arrived on the second day to record her vocals for the dark rock ballad ‘What Must Be Done’, Lady Macbeth’s opening song in the musical. In the song, she warns Macbeth that if he won’t go through with murdering the King of Scotland, ‘I’ll make sure you do what must be done’. Kerry’s powerhouse vocals filled the studio, and she brought the voice of Lady Macbeth to life with her beautifully haunting and charismatic performance.

Karl Queensborough was first in on the third day of sessions to record his vocals for ‘Paradox’, sung by Macbeth. In the rapped verses, Macbeth debates whether to betray the King of Scotland, and in the sung choruses he comes to terms with his decision, singing ‘Make your choice, try not to crack, and don’t look back’. Karl’s deep, conversational rap flowed effortlessly, and he approached the high-pitched choruses with fragility to capture Macbeth’s inner self-doubt.

Next in was Maiya-Quansah Breed, who began the session by warming up her voice in readiness for the high vocal range of pop ballad ‘Never Give Up’. It is sung in Act Two by Lady Macduff, who tells herself that she’ll ‘never give up’ on her relationship with Macduff, even when all the odds are against them. Maiya’s soulful voice and pure tone captured the undying hope of the innocent Lady Macduff who, even facing heartbreak, still ‘believes in love’.

To finish the third day, Jamie Muscato came in to record ‘However Hard I Try’, sung by Macbeth’s loyal friend Banquo as he wrestles over whether to expose Macbeth’s crime. Banquo fears that he won’t be able to live with the guilt if Macbeth is sentenced to death – ‘I won’t forgive myself, however hard I try’. Jamie’s rich, emotive vocals captured Banquo’s turmoil, and his high vocal range in the final chorus brought the track to a spine-tingling conclusion.

On the fourth and final day of sessions, James, Gina, and Fi edited and prepared the tracks in readiness to be mixed by Rik Simpson (more news on this coming soon!), and the team finished their late-night session with white wine and toasted paninis in the cosy studio bar – the perfect end to a magical experience at Abbey Road Studios.